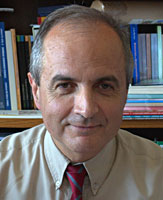 Christos Lionis was born in Rethymnon, Crete in 1955. In 1973 he entered the Medical School at University of Athens and graduated in 1979. He is qualified in both Internal Medicine and Social Medicine.

For 9 years he served as the Manager and Medical Director of the Spili Health Centre, a pilot site for the University of Crete Primary Care Centre, obtaining experiences as clinician and researcher in the field of Primary Health Care and General Practice. In 1994, he was elected as Assistant Professor of Social and Family Medicine at the Department of Social Medicine, University of Crete and in 2002 he was elected as Associate Professor.

Professor Lionis is member of different European networks (European Review Group in Prevention and Health Promotion in Family Medicine and General Practice / EUROPREV, European Society of Primary Care Gastroenterology / ESPCG and General Secretary of Mediterranean Medical Society / MMS). Since 2001 he is an elected member of the Executive Board of the European Society of General Practice/Family Medicine (WONCA Europe). Since 1987 he has developed formal affiliations with Swedish and Dutch Universities, taking part in multidisciplinary research and educational teams and participating in large comparative projects.

His current activities and main areas of interest concentrate on Primary Health Care and Family Medicine/General Practice. He coordinates the Primary Care Network in Crete, a strong cooperation among 10 Health Centres in rural Crete and the Medical School of the University of Crete. He has also run a European Project founded by DGV/EC (96 202236 05F03) as well as several national projects, while he has published/accepted 93 original papers in international and European journals and 54 in Greek journals. Since September 2001 Professor Lionis has been appointed Deputy General Director of the Regional Health and Welfare System (Pe.S.Y.P.) of Crete, a newly developed planning and regulatory body overseeing all health and welfare services that are part of the Greek National Health System. It was served this System until May 2004.